A life which irradiates 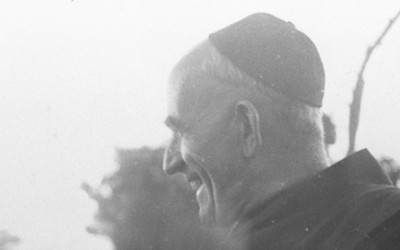 Already during his lifetime, Henri Grialou was radiating the love of God. He was close to people and lived fully with God. Through his actions, his words, his friendliness he was seeking the good and the truth.

He carried out his tasks, made concrete choices with the help of Holy Spirit, and let himself be guided by God’s light.

The witnesses get involved

After his death, Fr. Marie-Eugène continues to pursue his mission. Recognizing his holiness of life, the people of God invoke his aid for all sorts of reasons. Numerous testimonies have been sent to Notre-Dame de Vie Institute. At the same time, his teaching on the life of prayer and of active involvement in the world continues to be spread widely.

In 1983, the Father General of the Order of Discalced Carmelites, who was present for the beatification of Raphael Kalinowski in Poland, encouraged the general responsibles of Notre-Dame de Vie Institute to ask that the cause of canonization of Fr. Marie-Eugène be opened.

The inquiry is opened

Given his reputation of sanctity, his Cause of Beatification and of Canonization was opened in 1985 by Abp. Raymond Bouchex, Archbishop of Avignon who formed an ecclesiastical tribunal and a commission of experts.

He has given everything to me, the Good Lord has. The depths of God is Love.
25,000 pages of documents and of testimonies were sent in 1994 to Rome, to the Congregation for the Cause of Saints. The latter then undertook to write a Positio presenting a well-documented biography and all the elements needed to judge the heroic virtues (theological and cardinal virtues, and annexes), i.e., of the sanctity of Fr. Marie-Eugène. This Positio on the heroic virtues was finished in 2000.

The Theologian Consultors, after their discussion to ascertain if the Servant of God had praticed the Christian virtues in heroic fashion, arrived at a positive conclusion.

Yes, he lived a heroic life

On 19 December 2011, Pope Benedict XVI pronounced favorably on the heroic virtues of Fr. Marie-Eugène, who was then declared Venerable.

The inquiry goes on

In fact two inquiries are needed for the Church to recognize someone to be Blessed. One on the life of the Servant of God, and the other on a possible miracle.

In front of the positive result of these two inquiries and the relevance of the message nurtured and transmitted by Venerable Marie-Eugène of the Child Jesus, Pope Francis authorized his beatification. This decision was officially communicated on 4 March 2016.

In celebrating his beatification on November 19, 2016, the Church offers to a greater number of people the possibility of getting to know him and to benefit from his witness.

I am made to lead souls to God, to lead them to divine union.
It encourages us to confide our intentions to his prayer.

The Blessed thus carries on his mission, coming to the encounter with those seeking meaning in life, those who are seeking God. Making him known more widely in his double dimension as Father and Spiritual Master contributes also in helping him to accomplish his mission in the Church.

And who knows ? Maybe he will be canonized one day ?